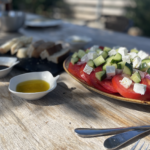 At the time of writing this blog post, we are on holiday in Crete, enjoying a summer holiday we couldn’t have had during the school summer holidays. The little one got Covid but one month before we departed, the rest of us have been vaccinated and with the Fit to Fly’s all negative, we seem to have lucked out and managed to get away. Having seen the weather reports back in the UK, we are feeling immensely grateful. Even though the days start and end a bit chilly, the middle of the day is still warm and we’ve enjoyed the fresh seafood and Mediterranean diet that is so plentiful and easy to do here.

And there is plenty of evidence to show that the Mediterranean diet is good for you from a cardiovascular, diabetes, cancer (and the list goes on…) point of view.

Now there is also evidence that what you eat may also influence the microbiota that lives on human skin.

What did this study look at?

Skin swabs were collected by rubbing the skin for 30 seconds from the crook of the elbow, behind the ear, forehead and forearms and the control swabs were exposed to room temperature air for 5 seconds. DNA was then isolated from the samples.

Anyone who had used a topical steroid within the last 7 days was excluded and all participants were asked to not shower or apply an emollient to the skin collection area for 24 hours prior to sampling (though 78% didn’t do this!)

How do you know what the people ate?

This was by either repeated 24 hour food lists or a food frequency questionnaire.

The authors found that the microbial composition varied according to the body site sampled, as well as with age, sex and BMI.

Also interestingly, they found that hours spent outdoors in the summer during weekends, contact with animals, location of housing ie urban vs rural and being part of a co-habiting couple had more associations with levels of bacteria such as Staphylococcus, Propionibacterium and Corynebacterium.

What about the effect of diet?

They found some evidence that total energy intake and macronutrient intake significantly affected abundances of various skin bacteria. These macronutrients included carbohydrates, dietary energy, fat, fibre and protein. The effects were not clear cut with negative and positive associations of each macronutrient with different variants of Staphylococcus and Corynebacterium.

So where to from here?

Well it’s a start! This study clearly shows that more work is needed in this area, especially as we know that conditions such as eczema have distinct skin microbial changes between and during flares.

This study was on healthy adults and shows that the skin microbiota changes depending on age, sex and BMI and also on what physical pursuits that person enjoys in the different seasons. There is now some, albeit low level, evidence that what we eat alters the microbiota on the skin too.

It looks like energy, who has it, who has the most and who can create it, is going to be one of the … END_OF_DOCUMENT_TOKEN_TO_BE_REPLACED