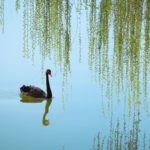 It was extremely interesting to read in the June edition of Clinical & Experimental Dermatology of something called narrative fallacy.

What is narrative fallacy?

This is something that doesn’t just happen in dermatology, or medicine.  It happens in all areas of life.

It was originally coined by Nassim Taleb in his book ‘The Black Swan: The Impact of the Highly Improbable’ published in 2007.  Nassim Taleb is a distinguished Professor of Risk Engineering at the New York University Tandon School of Engineering.

It is basically the human tendency to connect events in such a way as to weave an explanation between those events.  So we look at everyday events, we analyse them and we attribute meaning to them.

Why do we do this?

It’s essentially how our brains process and make sense of the world around us.  We, in a sense, tell ourselves a story, we force a link between events which allows us to make logic of it all.

So, for example, you might have a car accident one day.  It might have been that the night before, you didn’t sleep particularly well.  It’s possible then to believe that your poor night’s sleep caused you to have the car accident.  In reality, if this were true then there would be accidents all over the place every time someone had a poor night’s sleep.  The truth is that there are many variables, some of which are beyond our control, that affect why a car accident happens.

So what is the relevance to medicine?

We all know that medicine is an imperfect science.  We base our guidelines and treatments on what we call evidence-based medicine whereby randomised controlled clinical trials (RCTs) and extensive peer review remain the main cornerstones of improving the quality of medical information available.  In the scientific literature, we do however use what we call case reports or case series to bring unusual cases or outcomes to attention.  This has its uses as it does help bring medical attention to rare diseases or new treatments.

However, case reports and small case series are ranked low in the evidence hierarchy as they are essentially uncontrolled experiments on a small number of subjects and so their findings cannot be extrapolated to the population as a whole.  Also, when people recall things that happened in the past, they may not recall things properly and that introduces bias.

Their popularity therefore in high quality journals is on the decline because of this.  And they can also, through narrative fallacy result in the wrong conclusions being drawn.

So the relevance to dermatology?

The authors state a few examples of narrative fallacy, a couple of which I will explain here.

The first was about the conventional surgical teaching of not using adrenaline in the local anaesthetic when operating on distal sites such as fingers, toes, noses, ears etc.  This advice was based on a study published before 1950 which looked at 21 cases which underwent hand surgery and were treated with procaine or cocaine and then developed subsequent finger necrosis (finger death).

And the last example?

So the upshot is?

Taleb’s own words on this are: ‘When you develop your opinions on the basis of weak evidence, you will have difficulty interpreting subsequent information that contradicts these opinions, even if this new information is obviously more accurate.’

So how do we prevent ourselves falling into the trap of narrative fallacy?

Firstly, it is understand that it exists and that as a human, you are subject to this way of thinking.  Secondly, it is to recognise when you start attributing linkage when there is none.

As Taleb himself said: ‘when searching for real truth, favor experimentation over storytelling, favor experience over history, and favor clinical knowledge over grand theories.’

More and more research is looking at the role nutrition plays in disease.  And it is fascinating … END_OF_DOCUMENT_TOKEN_TO_BE_REPLACED