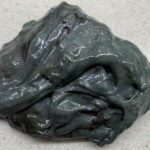 Anyone who has a child aged between 5 and 10 years of age will have heard of slime. It’s not the stuff you find coming out of a slug or a snail, this is the stuff of party bags, easy online purchasing and more recently, the stuff of endless online videos showing how to make your own slime at home.   In our house, it’s the stuff that has trashed carpets, I’ve found stuck on toilet seats, and partially blocking up the bathroom sink and the cause of all sorts of exasperation.

In my bid to ban the stuff from the house, it was therefore interesting to read of two cases of irritant contact dermatitis from homemade slime in the journal Pediatric Dermatology.

But my children play with slime all the time. Surely it’s safe?

Slime can be made of all sorts of things. It used to (and may still) contain borax or boric acid. Boric acid is a preservative found in certain cosmetics, foods and contact lens solutions. It is also a potent agent at causing an irritant contact dermatitis.   Second or third degree burns have been reported in some cases in contact with borax-containing slime!

What else is in slime then?

My good source, who has been one of those that has watched numerous online videos on how to make slime at home, tells me that the main ingredient is PVA glue, followed by borax, saline solution or contact lens solution, glitters, colourants and perfumes. All of the above products can cause an irritant contact dermatitis.

This is an eczema that is caused by a product applied to the skin that directly kills cells (has a cytotoxic effect). All of the above ingredients of slime can have that effect especially if applied to the skin for long enough and both of the cases mentioned in the above report had been playing with slime for a duration of between 1 to 4 days.

What would I see if my child developed an irritant contact dermatitis?

Usually within 24 hours of exposure to the irritant there would be redness, swelling, itching and some element of pain. There may even be some blisters.

What should I do if it occurs?

If you see the above signs and it develops shortly after prolonged contact with slime, then slime would probably be the culprit, though of course, there may be other causes. Clearly, if you suspect slime, avoidance of slime is the key and that may be sufficient to stop anything more serious from developing. Washing the hands (to remove any irritant) and applying a moisturizer would also help. A short course of topical steroids may be required if things are particularly swollen or itchy.

From a personal point of view, I think the battle against slime may finally be over, not because of the above article, more so because the person in question has simply become bored of the stuff!

More and more research is looking at the role nutrition plays in disease.  And it is fascinating … END_OF_DOCUMENT_TOKEN_TO_BE_REPLACED