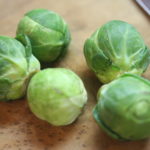 It’s that time of year when sprouts are on the menu! Now I’m rather partial to a good Brussel sprout but there are certain members of my family who would run to the hills at the mention of sprouts with dinner and pull all sorts of faces if I put more than three of the aforementioned on their plate.

I’ve always said, while slipping a fourth sprout surreptitiously on the plate, that sprouts are good for you and there is scientific evidence for this. Brussel sprouts are a cruciferous vegetable and cruciferous vegetables have been gaining a lot of popularity with the current trend of eating more of a plant-based diet and suggestions of anti-cancer properties.

What is a cruciferous vegetable?

They are cool weather vegetables, which mostly contain the Brassicas. They have flowers that have four petals which form a cross and mostly the flower buds or leaves are eaten.

So what’s so good about cruciferous vegetables?

Cruciferous vegetables contain a chemical called glucoraphanin which is released when chewed and forms another chemical called sulphoraphane. Sulphoraphane has been shown to reduce the risk of developing breast, gastric and skin cancer.

Is that the same for all cruciferous vegetables?

They all contain glucoraphanin but certain vegetables have higher concentrations of this chemical and variable abilities to kill cells (cytotoxic effects). The vegetable that has the highest concentration is the broccoli sprout, more specifically apparently, the 3-day old broccoli sprout.

Now this looks nothing like a Brussel sprout but look rather like something between alfalfa and watercress.

So we have to eat loads of cruciferous vegetables?

Well eating loads of cabbage-type vegetables has many plus points! However, from a dermatological point of view, many of the studies look at topical broccoli sprout extract ie extract that is applied to the skin. In this form it shows promising anti-cancer properties.

Does topical broccoli sprout extract have any other benefits?

Interestingly, Professor Edel O’Toole mentioned topical broccoli sprout extract in her recent Gerald Levene lecture in the Dermatology section meeting at the Royal Society of Medicine, London in November. Her talk was on palmoplantar keratodermas (thick scaly genetic skin conditions of the palms and soles) and topical broccoli sprout extract was mentioned as a possible therapeutic tool.

Its use in other keratin disorders has also been investigated.

What about oral broccoli sprout extract?

This has also been looked at in a more recent study. In this small study, 17 patients who had atypical moles and a previous history of malignant melanoma were split into 3 groups and were given 3 different doses of oral broccoli sprout extract.   Moles were photographed at baseline and then photographed and biopsied at varying points in time.

The results did not reach statistical significance. Only the higher concentration of broccoli sprout extract reached some sort of tissue level and many of the moles increased in size in all groups but it was thought that the increase in size was the most reduced in the highest dosage group, if that makes sense!

Anyway, it was not a robust study with only a small number of patients studied over a short period of time (28 days) and different moles were assessed at day 1 and day 28 as it is not good practice to keep biopsying the same mole.

Where does this leave us?

There seems to be some evidence building for topical broccoli sprout extract at least and little for the oral version at the moment. However, I can say for sure that eating your sprouts will give you many other health benefits!

More and more research is looking at the role nutrition plays in disease.  And it is fascinating … END_OF_DOCUMENT_TOKEN_TO_BE_REPLACED