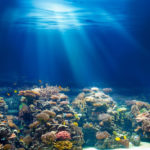 In a previous blog we discussed how most sunscreen formulations contain elements that are damaging fragile marine ecosystems causing, for example, bleaching of coral. The Environmental Effects Assessment Panel of the United Nations Environment Programme has expressed concerns about this and the Community Rolling Action Plan of the European Chemicals Agency has listed 8 out of 16 commonly used UVR filters in Europe because of potential eco-toxicity and dangers to human health.

But in the end of the day, we still need sunscreens to prevent damage to the skin from UV radiation.

So what can be done about this?

Apart from sun avoidance and the wearing of UV protective garments, the choice is still limited. However, hope is on the horizon.

Well, we’re not the only species that needs protection from ultraviolet rays. Marine species living in shallow-water habitats where they are exposed to intense UV radiation, protect themselves by producing naturally occurring UVR-absorbing compounds called mycosporine-like amino acids (MAA).

The most photostable of these mycosporine-like amino acids is called palythine.

So if we eat seaweed, will we be protected from the sun?

Many algae, fungi and plants can synthesise these MAAs but animals cannot. However, eating MAAs hasn’t really been shown to be of benefit to mammals. Medaka fish fed a diet rich in MAAs only showed traces of MAA in their skin but MAA was not found at all the skin, eyes or liver of hairless mice fed a similar diet.

And do they work?

Porphyra -334, one type of MAA was shown to prevent photoaging in UVA-irradiated human skin cells.

The British Journal of Dermatology recently published an article demonstrating the photoprotective effect of the most photostable MAA, palythine on human skin cells.

So why aren’t we putting these MAAs into sunscreens?

There is, apparently, one MAA product available using MAAs extracted from the red alga Porphyra umbilicalis but this contains a tiny quantity of MAA in the final product which contributes a negligible, if any, effect on the SpF of the product. There is also a current poor understanding of how to produce specific MAAs in an industrially economically way, other than farming huge quantities of seaweed. Also, the chemical structure of MAAs make them highly difficult to artificially synthesise.

However, the potential is there and clearly further studies are required.

Hopefully, we won’t be waiting too long!

More and more research is looking at the role nutrition plays in disease.  And it is fascinating … END_OF_DOCUMENT_TOKEN_TO_BE_REPLACED