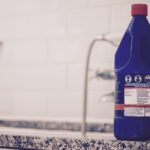 Though eczema can flare at any time of the year, winter is often a particularly bad time. Why? It’s often a combination of winter coughs and colds, and cold, crispy weather combined with central heating indoors.

Though not all flares in eczema are infective, they can often become secondarily infected if not treated effectively in the first instance. This often requires antibiotic therapy. However, any parent of a child with eczema will tell you that their child may often be on back to back courses of antibiotics in order to control their eczema.

With the current trend veering away from antibiotic therapy due to worries about antibiotic resistance, any measures which can treat these infective episodes without needing antibiotics is greatly welcomed.

It is the sodium hypochlorite (NaOCl) in bleach which has been used since the 18th Century as a disinfectant and antiseptic.   It wasn’t until World War I that its use came to be accepted.

Topical antiseptics containing sodium hypochlorite now have a role in the treatment of deep ulcers, pressure sores and certain wounds.

When sodium hypochlorite is mixed with water, reactive chlorine species are generated and it is these that have the antibacterial effect.

Studies have shown that sodium hypochlorite in a solution as weak as 0.005% can be effective against Staphylococcus aureus in wounds and skin ulcers.

But is it not toxic?

Yes, if ingested or if fumes are inhaled. Small amounts that are swallowed can cause burning of the mouth and throat and vomiting. Obviously if large amounts are swallowed, ulceration of the stomach and digestive tract can occur. Breathing in the fumes can irritate the eyes and airways.

But I’m worried about putting bleach on the skin. It just doesn’t sound right!

If splashed on to the skin, sodium hypochlorite can indeed cause a chemical-type burn to occur.   Household bleach also contains other chemicals which can irritate the skin such as sodium hydroxide as a stabilizer, surfactants, perfume to hide the smell and sud suppressors.

So how can it be safe?

In order for bleach baths to be safe, the correct concentration of bleach to bath water is important.

A recent study showed that bleach baths in which the bleach was diluted to a 0.005% concentration had no effect on skin barrier function compared to normal bath water. In order to achieve a concentration of 0.005%, half a cup of household bleach (0.36L) was added to a standard 40 gallon (150L) bathtub.

Many studies recommend soaking in such a bath for at least 10 minutes, twice weekly followed by rinsing off with normal tap water. Applying an emollient after bathing helps improve skin barrier function.

A paper in 2010 used Milton® sterilizing fluid. This contains 2% sodium hypochlorite without the additional additives found in household bleach which may exacerbate eczema further.   The study used 250ml of Milton® sterilizing fluid per full bathtub (120L) to give a final concentration of 0.004% sodium hypochlorite. Three children aged 4 to 11 years with moderate to severe eczema were treated as such and all three improved at 2 months with no adverse reactions.

And it does work then?

There are studies confirming the benefits of bleach baths together with that reported from patients in clinical practice.

So in the correct clinical circumstances, bathing in a weak solution of sodium hypochlorite can be safe and recommended.

More and more research is looking at the role nutrition plays in disease.  And it is fascinating … END_OF_DOCUMENT_TOKEN_TO_BE_REPLACED