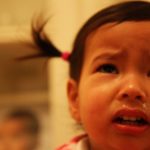 I was chatting recently to one of my patients. She had recently had her third child in as many years and we were discussing the merits and tribulations of having so many children so close together. The one thing I told her I didn’t miss (amongst quite a few things actually) was the persistent ‘tramline’ snotty faces that seems de rigueur for anyone aged five years and under.

But I clearly had spoken too soon because it appeared a few days later on the face of my youngest child. He got over it soon enough but several days later he came to me with itchy patches, which he called his ‘special eczema.’ On further questioning, the patches were coming and going within a day but were intensely itchy.

So I’m guessing these were not eczema?

You are quite right. The key here is that the rash comes and goes within a day. Eczema doesn’t do that but urticaria classically does.

This is defined as raised wheals which are typically paler than normal skin and exhibit redness in the skin surrounding the wheals. They are itchy and some patients report a burning sensation. Individual wheals last anything from minutes to hours but always last less than 24 hours. More wheals can develop, however, over the next few days. 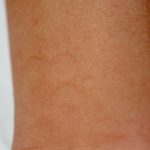 Raised wheals clustered on the wrist 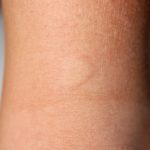 Raised wheal on the shin – the pale central area can be seen with a small amount of surrounding erythema.

I know someone who has food allergies and she gets urticaria.

It is true that people with food allergies can get urticarial reactions to the foods that they are allergic to. These are usually immediately or very soon after exposure to the food and are reproducible. Certain drugs can also give you an urticarial drug reaction.

So how do you know that this wasn’t a food allergy?

What was this then?

We call it viral induced urticaria. It is actually fairly common in children. In a child who develops the lesions of urticaria without a clear link of exposure to foods (or drugs) with a history of recent cough, cold or viral infection, it is, to be honest, the most likely diagnosis.

How long does it last?

Not long, usually a few days to a few weeks. An antihistamine, either whenever things get really itchy (according to the dosing schedule on the medicine) or regularly to prevent the lesions from occurring should suffice. The whole episode should normally blow over in a few weeks with no long term sequelae.

What about getting allergy tests done?

In simple viral induced urticaria, no allergy tests are required. If however, the urticaria is persistent, ie the whole episode carries on for over 6 weeks, then it may be worth being referred for more effective treatment and the dermatologist may do more investigations depending on what is revealed from a more detailed history.

More and more research is looking at the role nutrition plays in disease.  And it is fascinating … END_OF_DOCUMENT_TOKEN_TO_BE_REPLACED