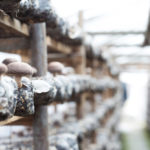 We had people for dinner not long ago. I say this like it’s a big thing and it isn’t normally but as usual, life with all its hectic-ness had been particularly so of late and at the last minute, one of the guests informed me that they didn’t eat meat. The easy steak dinner I had been planning had to be ditched and the vegetarian cookbooks donated by my mother-in-law were brought down from dusty obscurity. As I dithered, said guest then informed me that they were actually pescetarian. Finally a seabass and mushroom meal was decided upon and calm could then resume.

It would have been interesting to see my facial expression when I then spied a reported case of shiitake mushroom dermatitis in that particular week’s British Medical Journal which had landed on my doorstep on the very morning of said dinner. However, it was too late to reverse at that point.

What is shiitake mushroom dermatitis?

It is the second most consumed mushroom in the world. It is extremely popular in Asian food.

It is purported to have health benefits and has been used in Asia, where alternative medicine is popular. Medicinal use of the shiitake mushroom first became widespread in the Ming Dynasty (1368-1644) when the Chinese developed methods for cultivating the fungus on logs. It was then adopted as a tonic to combat aches & pains, and fatigue associated with ageing.

In more modern times it has become associated with treatments for cancers of the gastrointestinal tract. Indeed it has been approved as an adjuvant for stomach cancer in Japan since 1985.

What’s so special about the mushroom?

It’s due to a polysaccharide in the cell walls of the shiitake fruit body called lentinan. It is thermolabile.

Lentinan has been shown to help in the production of antibodies in mice injected with a vaccine against hepatitis B and also to stimulate cells of the immune system to attack cancer cells and cells infected with viruses.

One Japanese clinical trial found that patients receiving chemotherapy for advanced stomach cancer survived longer if lentinan was added to their chemotherapy drugs.

So to go back to shiitake mushroom dermatitis, this is essentially a toxic reaction to lentinan. As mentioned before, lentinan is thermolabile so if cooked, there is no problem.  It is only if the shiitake mushrooms are ingested uncooked that there is a risk of the rash.

It is thought that the lentinan acts to help release inflammatory mediators which then leads to the rash. This occurs usually 2-3 days after ingestion of raw or undercooked shiitake mushrooms.

However, not all people get the reaction. In one study, only 9 out of 500 patients developed the typical rash when exposed to intravenous lentinan. 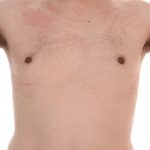 We call it a flagellate dermatitis. It is often itchy with red spots and small blisters in a linear-type (or flagellate) pattern often on the trunk, arms and legs. The affected person may or may not feel unwell and may or may not have a fever. If uncooked shiitake mushrooms are no longer eaten, the whole episode should resolve within 10 days.

You can also get a flagellate dermatitis with a chemotherapy drug called bleomycin (and similar chemotherapy drugs such as peplomycin and docetaxal), and also the connective tissue diseases dermatomyositis and adult-onset Still’s disease.

What is the treatment for the rash?

Clearly avoiding raw or undercooked shiitake mushrooms is key. Topical steroids, oral steroids and oral antihistamines may also help reduce the itch and possibly shorten the duration of the rash.

Anyway…, the dinner went well, all mushrooms were cooked way past any thermolabile point and I heard of no itchy rashes in the next week. There were probably some health benefits to be had too but these were probably more to do with having a good laugh with friends rather than any lentinan in our digestive systems!

More and more research is looking at the role nutrition plays in disease.  And it is fascinating … END_OF_DOCUMENT_TOKEN_TO_BE_REPLACED