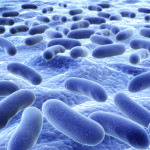 I was at the hairdressers the other day, flicking through a magazine and noticed that one of the larger cosmetic companies had produced a probiotic cream. The blurb accompanying the cream said that the science behind the cream had been revealed at the American Academy of Dermatologist (AAD)’s Annual meeting in March 2015.

Now, I was unable to attend the AAD last year but was able to attend the British Association of Dermatologist (BAD)’s Annual meeting in July.   Something had been mentioned about the skin microbiome but I didn’t remember anything about putting microbes on the skin in the form of a cream!

To contrast, prebiotics (which sounds very similar) are carbohydrates that the body cannot digest but are the food for the probiotics.

Microbiomes are microorganisms that live in a defined environment. Essentially they are everywhere, in the soil, in the water and in our bodies.

What was mentioned at the BAD?

It was a talk on the skin microbiome as it relates to eczema. It had been shown that the skin of eczema patients was more likely to be colonized with the organism Staphylococcus aureus than any other organism; indeed 90-100% of all organisms on the skin of an eczema patient would be Staph aureus. This compares to the skin of those who have no eczema. These individuals were found to have fewer organisms and a more diversified range of species, namely Staph epidermidis, then some Staph aureus and then some other microorganisms.

So probiotics are good for atopic dermatitis?

Brüssow then goes on to discuss the use of probiotics in the prevention of atopic dermatitis with some studies showing impressive results. In one Finnish study where pregnant mothers were given an oral Lactobacillus strain for 2-4 weeks before delivery and their children were given it for 6 months, they had a statistically significant reduction in atopic dermatitis compared to the control group and this effect was maintained for up to 4 years of life.

Other studies have shown similar results with also a possible reduction in skin prick test responses by 6 years.

I’ve heard probiotics may help in acne too?

Yes, there is some literature regarding the role of probiotics in acne too.

The cause of acne is multifactorial with excess sebum (grease) production, inflammation and colonization with an organism called Proprionibacterium acnes all playing a part. Some small studies have shown a reduction in skin inflammation after ingestion of oral probiotics and improved skin barrier function in patients after application of probiotics to the skin.

And I’ve also heard they can be used as anti-ageing creams too!

There are suggestions that oral probiotics can help protect against UV damage and improve hair and skin appearance, though the literature on this is limited. There slightly more evidence that topical probiotics can also promote wound healing.

Well, there is the odd study looking at the direct application of creams containing these “good” bacteria.

However, most of the commercially available probiotic creams do not use live bacteria but molecules from disintegrated Bifido bacteria and there is no science supporting the use of these molecules.

Should we all be taking probiotics then?

There does seem to be fairly good early evidence that oral probiotics have a beneficial effect on the incidence of atopic dermatitis in infants. However, more studies are definitely needed to assess their role in the treatment of atopic dermatitis, acne, protection against UV damage and wound healing.

More and more research is looking at the role nutrition plays in disease.  And it is fascinating … END_OF_DOCUMENT_TOKEN_TO_BE_REPLACED