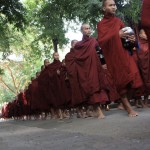 We are now into the second month of 2016 and hopefully, most of our New Year’s resolutions have not wilted away. This year, I am making plans to do some charity work, but not in the UK but in Myanmar, the country where my parents are from.

I have only been to Myanmar twice, the first time around 11 years ago. We went very recently, after the democratic elections, primarily to show my children where half their gene pool is from but also, a minor aim was to perform a reconnaissance mission as preparatory work for the charity work later in the year. The plan is to teach junior doctors in Myanmar about dermatology and to also hold clinics helping the general population under the auspices of the charity “Better Burmese Healthcare.” (www.betterburmesehealthcare.org)

What does this charity do?

This is a non-profit organization which uses clinicians in and outside Myanmar to provide a sustainable basic healthcare system for the poor people in Myanmar and also provides education and training for the healthcare professionals who run these clinics. There are several other similar organisations in Myanmar.

And we think we have it bad!

The healthcare system in Myanmar is described by the government of Myanmar in 2014 as “evolving with the changing political and administrative system.” It is a mixture of a public and private system in both the financing and provision.

There are only three general hospitals in the country, two in Yangon and one in Mandalay. There are slightly more private hospitals. Non-profit organisations such as Better Burmese Healthcare are a key component of providing healthcare to those not living in the cities where state-funded healthcare is virtually non-existent.

What dermatological diseases are there in Myanmar?

This is hard to specify as there is little data capture for us to know exactly what diseases there are in Myanmar.

However, the authors and doctors from Myanmar do agree that infectious diseases remain the biggest burden.

What would these be? 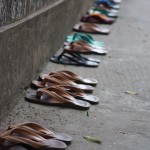 It is obligatory to take shoes off when visiting any religious place in Myanmar.

Simple fungal infections of the skin are probably the prevalent skin disease. This is not surprising as many monasteries, pagodas, stupas and temples require the visitor to enter barefoot as a sign of respect and tinea pedis is recognized as spreading by walking barefoot. 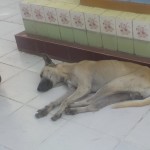 A mangey dog asleep at a pagoda

Cutaneous larva migrans is another, usually from the dog hookworm, again contracted via walking barefoot in soil containing contaminated dog faeces. Again, dogs and cats lounge around everywhere, themselves ridden with scabies or mange.   My children got slightly worried when we pointed this out.

Eczema is also a concern, as it is globally. The Global Burden of Disease Study 2010 found skin disease to be the fourth leading cause of nonfatal disease burden globally in both high- and low-income countries.

However, malaria and TB rank as the two top causes of death in Myanmar. Myanmar is also in the midst of an HIV epidemic. For the non-communicable diseases, hypertension and diabetes, diarrhoeal illnesses and respiratory illnesses are commonest.

It all sounds rather desperate!

It does. Myanmar has some of the worst health indicators in Asia, reflecting years of political suppression, economic mismanagement and high levels of corruption. It has the second lowest spending on healthcare in the world, stated as 0.99% of GDP for the year 2014-15.

So, though a little daunted, here’s to putting my best foot forward this year and providing medical help somewhere where there is an absolute need in the hope of being able to help in some small way.

More and more research is looking at the role nutrition plays in disease.  And it is fascinating … END_OF_DOCUMENT_TOKEN_TO_BE_REPLACED