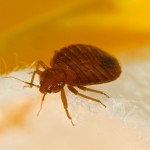 We met up with some good friends of ours recently who are frequent long-haul travellers. They had just renovated and extended their home and told us a story of how they had found, upon their return from a recent business trip away, that their youngest son was covered in a rash and they were going to seek my opinion. Before doing so, however, the rash spread to everyone at home. They then found that the spare bed was infested with bedbugs. They had been tempted to blame the builder who had been sleeping there in their absence but then they revealed that after returning from whichever business destination they had recently visited, they would often leave their suitcases on the spare bed for unpacking. Apparently, suitcases and luggage carousels are rife with bedbugs and that was the probable source of the bedbugs! We were shocked.

Then the British Medical Journal published a short clinical nugget in its Minerva section on bedbugs. In it, the authors state that bedbugs are on the increase worldwide and much of the literature seems to agree with this.

Bedbugs are visible to the naked eye. They are about the size of a lentil and are rather flat. They can be brown but also dark yellow or red. They can’t jump (like fleas) or fly but crawl and can crawl quite quickly. They are bigger than head lice (which are grey-ish in colour and grow to the size of a sesame seed).

Where do they live or hide?

They like crevices or cracks. The seam of a mattress or a crack or joint in a wooden bed-frame would be a typical location eg the headboard or wooden slats under the mattress. The fabric seam of pyjamas is another example.

What do they feed on?

They feed on your blood. They come out at night-time, attracted by your body heat and the carbon dioxide you exhale and bite your exposed skin to feed.

So, if you have been bitten, does it just look like an insect bite?

Yes but insect bites such as mosquito bites are random in pattern whereas bites from bedbugs tend to be linear. This is the so-called “breakfast-lunch-dinner” pattern described in the aforementioned BMJ article as the bug travels up your limb. 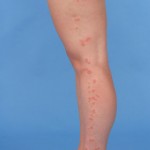 When do you get the rash?

Not everyone gets the rash. It happens to those who have an allergic reaction to the bedbug saliva. In those people, they develop an itchy red bumps which appear around 15-30 minutes after being bitten and can last for several days.

What can be done about the rash?

This will usually settle with a steroid cream together with an oral antihistamine for relieving the itch. If the rash is more severe and gets seriously scratched, they may get infected in which case you will need antibiotics.

Clearly, also the bedbugs must also be eradicated.

How can you tell if you have bed bugs?

Well, first things first. If you see one in your bed, then you have bedbugs. NHS Choices explains further that you may notice black spots on your mattress (which is their dried faeces!), brown mottled shells on your mattress (which is their shed skin as they grow!), blood spots on your sheets (where you may have inadvertently squashed one after it had fed!) or they may be a musty smell in the room if you have a particularly large infestation (which is produced by adult bedbugs with their scent glands when disturbed).

If I think I have bedbugs what do I do now?

Washing all clothing, bedding, soft toys etc in a 60°C wash or putting them in the tumble dryer on hot for 30 minutes should kill the bugs. You will also need to thoroughly inspect all crevices of the bed and furniture, probably dismantling it in the process and use a vacuum cleaner with a hose to suck any bugs up. You must dispose of the vacuum bag afterwards, keeping it sealed. It is also recommended that you use a bedbug-specific insecticide, though bedbugs seem to be building up resistance to these and ordinary insect repellant doesn’t work. If you have no luck with above measures, you can call in professional help from a pest control company.

And now I’ve made you all thoroughly itchy at the thought of bedbugs, I’ll wish you all a very merry Christmas!

More and more research is looking at the role nutrition plays in disease.  And it is fascinating … END_OF_DOCUMENT_TOKEN_TO_BE_REPLACED