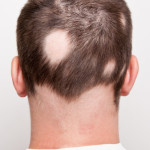 Alopecia areata (AA) is an autoimmune condition which presents with well-demarcated areas of hair loss. It can present at any time of life but usually presents in the younger age groups, usually before the age of 30 years. The condition is sporadic or affected individuals will develop one or several patches which then regrow and then develop new patches elsewhere. Some individuals may have progressive hair loss and end up losing all their body hair, so called alopecia universalis or totalis.

How do you get alopecia areata?

Before the hair loss happens, there are usually no symptoms. However some patients may report a little bit of itch. The bald patches are often noticed by the patient’s hairdresser.

The patches of hair loss may be smooth or there may be some shortened or broken hairs in the patch, so called ‘exclamation mark hairs.’ If there is some hair regrowth in the patch, the hairs are often finer and paler than the usual hair colour. Some patients just notice a patch of shortened hairs, having completely not noticed the bald patch at the time it occurred.

Why does it happen?

What treatments are there for alopecia areata?

First line treatments involve steroids either as strong steroid creams or an injection of steroid into the bald patches.

Other treatments have included short courses of oral steroid tablets and other treatments applied to the bald patches such as minoxidil or dithranol.

The success rate of DCP has been reported to be between 50-60% with a range as wide 9-87%. The relapse rate after significant regrowth, ie the rate of hair loss after regrowing hair back has been reported as 62.6% with the median time to relapse being 2 ½ years.

There is no treatment for widespread alopecia. Hair pieces or wigs can be prescribed on the NHS and Alopecia UK provides invaluable support and information for patients with the condition.

Is that it? Are there any new treatments?

At the time of writing this blog, I had just returned from the British Association of Dermatologists Annual Meeting in Manchester. I had listened to a lecture by Professor Angela Christiano from New York on the genetics of alopecia areata. In this lecture, she described new research into a group of drugs called Janus Kinase (JAK) inhibitors in the treatment of AA.

One of these drugs, ruxolitinib is licensed for use in a blood disorder called myelofibrosis and as a ‘side-effect’ of treatment, it was noticed that longtanding or patchy alopecia areata regrew.

Further research into these JAK inhibitors has revealed interesting results. In mice studies, oral JAK inhibitors prevented the development of AA and also reversed established disease with an effect which persisted 2-3 months after treatment had finished. The same was found of the cream versions of the JAK inhibitor drugs, so called topical versions. The reversal of established disease was seen as early as 2-4 weeks after the start of treatment and lasted for 2-3 months after the end of treatment.

Small scale studies in humans (the trial had three patients only) with oral ruxolitinib have shown near complete hair regrowth within 3-5 months.

In her lecture at the BAD, Professor Christiano reported that a further study looking at 12 adults treated with ruxolitinib showed 9 of the 12 had at least 50% regrowth at 24 weeks.

A newer drug called tofacitinib (which is not currently available in the UK, only the US) also showed promising results at 4 months in one 17-year old.

The newest agent, baricitinib, which is still in its trial phase in the US at the time of writing has also shown promising results.

What are the side effects?

The trials in the US are currently open-label, off-license trials with the patients self-funding the costs of their medications. Currently, ruxolitinib costs $9000 per month and tofacitinib $3000 per month.

Also, JAK inhibitors also inhibit several cellular pathways with important and severe immunosuppressive side effects. For a benign condition that usually start in a young population such as AA, the safety profile of any treatment does have to be considered seriously.

It may be that JAK inhibitors may work in other autoimmune conditions. Professor Christiano showed some evidence that a patient with alopecia areata and vitiligo (another autoimmune disorder) who was treated with a JAK inhibitor not only developed hair regrowth during the trial but also showed repigmentation of his vitiligo.

Clearly exciting things are happening in the world of alopecia areata, so watch this space!

More and more research is looking at the role nutrition plays in disease.  And it is fascinating … END_OF_DOCUMENT_TOKEN_TO_BE_REPLACED