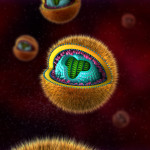 Towards the end of May of this year, scores of patients started turning up to clinic clutching pages torn out of newspapers reporting the advent of a novel drug to successfully treat melanoma.

The above report even went on to declare that 10% of patients were in complete remission with no detectable cancer remaining.

Well no, not really.

And I heard the breakthrough was with a drug based on the herpes virus?

Yes, that is true.

The novel drug in question is called talimogene laherparepvec or T-VEC for short!   T-VEC is a modified derivative of the herpes virus, more specifically, herpes simplex virus type 1 (HSV-1), the type that causes cold sores.

What did the trial involve?

The trial was a large, multicenter, randomized controlled trial based in North America.   It was published in the Journal of Clinical Oncology.

The study was comparing T-VEC injected directly into melanoma to injections of granulocyte-macrophage colony-stimulating factor (GM-CSF). GM-CSF is a natural and important chemical produced by the body as part of the immune response. Its role is in recruiting white blood cells to fight infection or abnormal cells, such as in cancer.

436 adults aged 63-64 years with advanced, ie inoperable melanoma were randomized to receive either the T-VEC injections into the tumour or GM-CSF injections under the skin.

T-VEC was given as a first dose with another 3 weeks later and then once every 2 weeks. GM-CSF was given daily for 14 days in 28-day cycles. Treatment was initially 24 weeks for everyone and then continued after 24 weeks until there was either lack of response, remission or the treatment became intolerable. At one year, those with stable or responsive disease could continue for a further 6 months.

How did they measure how people fared in the study?

The main outcome measure of the study was disease response rate, especially that which started within the first 12 months and lasted continuously for at least 6 months. This was measured through clinical assessment of the visible tumour and body scans. They also looked at overall survival and duration of response amongst others.

And what did the study show?

The study did show that people given T-VEC had a significantly better disease response rate than those given GM-CSF (16.3% compared to 2.1%).

Also, the average time to treatment failure was significantly longer in the T-VEC group compared to the GM-CSF group (8.2 months compared to 2.9 months).

The average survival was slightly longer in the T-VEC group too (23.3 months compared to 18.9 months).

So what did the researchers conclude in the end?

They concluded that T-VEC was the first cancer immune therapy to demonstrate any effectiveness against inoperable melanoma.

The study did show that significantly more people responded to treatment with T-VEC than GM-CSF injections. It also improved survival by an average of 4.4 months though this was of borderline statistical significance, meaning that there is the possibility that there is no difference at all or that we can have less confidence in this effect.

So where do things go from here?

Clearly, the results of this trial are promising. However, it has been pointed out that GM-CSF is not used in the treatment of melanoma so ideally, T-VEC should be compared to treatments currently available for advance melanoma such as chemotherapy, radiotherapy and other immune therapies such as ipilimumab.

The press wrongly attributed T-VEC as being a “cure” for melanoma. Most of the people in the study passed away during the two years of follow-up but those receiving T-VEC lived on average slightly longer.

The trial should also not be misinterpreted to make you think that getting cold sores can offer any protection against melanoma!

Then NHS UK quite rightly points out that prevention is better than cure and avoiding overexposure to sunlight and other sources of ultraviolet light, (eg sunbeds) is far better.

More and more research is looking at the role nutrition plays in disease.  And it is fascinating … END_OF_DOCUMENT_TOKEN_TO_BE_REPLACED