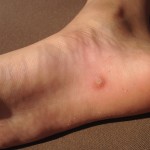 Another common problem in childhood is warts. It is surprising how many children are referred either on the NHS or privately with warts, be they on the hands, feet or elsewhere.

Now this sounds like a pretty daft question but in a way, the answer helps to underline the treatments for warts and why sometimes, treatment may be not offered.

Warts are caused by a virus, namely human papilloma virus, so they are a form of infection of the skin. The wart virus is very good at ‘hiding’ from the body’s immune system and hence why warts can remain on the body for some time. However, the body does eventually get rid of the wart and so hence why the problem remains largely one of childhood, though of course, adults can get warts too. A study examining the natural progression of warts showed that warts will spontaneously clear after 2 years without treatment in 40% of children.

Also, the average cure rate of using placebo preparations, ie treatments with nothing active in them at all is around 30%.

On the NHS, warts in children are a referral exclusion ie we don’t administer hospital treatments to warts in children. If they are secondarily infected with bacteria or causing problems such as bleeding and pain, then that is a different matter but plain old warts, though a nuisance, are benign and will eventually go of their own accord.

But no matter what I do, I can’t get rid of my child’s wart!

I, and probably every other dermatologist must hear this an awful lot. And it is true that to get rid of a wart takes patience and persistence.

Warts are very good at hiding in the topmost layer of the skin. This layer is covered with a compacted layer of keratin and in certain places on the body such as the palms and soles, this layer is really quite thick. This is understandable as these areas get a lot of trauma.

But I’ve been using the home freezing thing from the chemist!

What is in wart paint?

The active agent in wart paint is salicylic acid and it can be used pretty much on any wart anywhere except the face. The salicylic acid effectively ‘blasts’ through the skin cells infected with the wart virus and so an irritant reaction should be expected. The different wart paints available are due to different formulations at slightly different strengths. A recent Cochrane review into topical treatments for wart paints has shown evidence of a benefit.

What about home freezing kits? Aren’t they supposed to be better?

“Freezing” or cryotherapy of warts is also a destructive process, whereby the skin cells harbouring the virus are killed off. It also induces secondary inflammation.

So what treatments are can I do or do we just put up with them?

As you can see from above, the treatments for warts are usually destructive and can cause pain and discomfort in themselves and this is something you will have to reason with your child if you want to get rid of their wart. 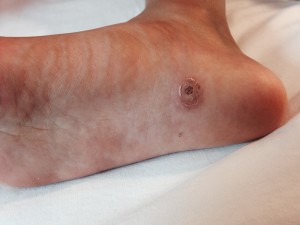 Verruca after 2 weeks of treatment at home

However, there is an argument for treating warts, especially if they are causing pain or discomfort, or for cosmetic reasons or simply because they have been there for ages and not gone. Preventive measures, such as wearing verruca socks may also prevent spread.

When can I get referred?

Warts that should be referred to a dermatologist are those where the diagnosis is in doubt, the patient is immunocompromised, the warts are large and extensive or if they persist despite maximal treatment at home for at least 3 to 4 months.

What is maximal treatment at home?

There is a lot that can be done at home to clear warts. At Orpington hospital, we advise patients to follow the following regime for at least 3-4 months before considering physician-administered cryotherapy. 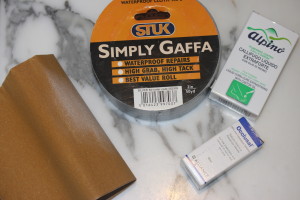 There is little evidence in the scientific literature to show that the above regime works but clinical experience tells us it does. Definitely, the evidence shows us that using one method in isolation is not as effective as combining methods.

Also, the literature is unclear as to what the optimum interval between treatments should be but for the home treatment regime advised above, nightly to several times a week would be advised and for physician-administered cryotherapy, once every 2 to 4 weeks, all being well inbetween. This makes sense because if treatment is sporadic or consists of just a couple of treatments only then the topmost layer of the skin just forms another hard skin layer on top of the wart in between treatments and the wart remains as it was, just as if you hadn’t treated it at all.

So if you want to give it a go at home, then take a trip down to your local hardware store and chemist!

More and more research is looking at the role nutrition plays in disease.  And it is fascinating … END_OF_DOCUMENT_TOKEN_TO_BE_REPLACED