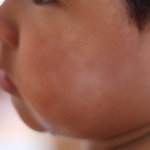 It is the month that all the children go back to school and some are rejoicing – holiday childcare issues over for now! – whilst some are bemoaning the increased congestion on the roads in the morning and mid-afternoon. Many have hopefully enjoyed a good summer holiday, either at home or abroad.

Now, one September a mother at school pulled me aside and asked me as to whether her daughter had developed vitiligo over the summer. Her daughter’s cheeks were not dissimilar to the photo above.  The mother was quite worried.

I was able to reassure her that her daughter did not indeed have vitiligo but a condition called pityriasis alba.

What is pityriasis alba?

This condition often presents on the cheeks of children, usually after sun exposure (and hence usually after the summer months). The usual presentation is of pale patches which are often mistaken for vitiligo.

It can also occur around the mouth and on the chin but less commonly can occur on the neck, arms and shoulders aswell as the face.

Why does it occur?

There is often a preceding redness or pinkness with an associated fine scaling but this is often mild and not noticed and it is only when the paleness (or hypopigmentation) occurs that the patient (or parents of the patient) seeks medical advice. It can sometimes be a manifestation of eczema but can also occur in those who don’t have eczema.

Are there any treatments for it?

Treatment is often requested in an attempt to reduce the paleness of the patches and therefore can be disappointing because the paleness can take a long time to recover. This usually occurs when the surrounding tanned skin loses its tan. Not surprisingly, it is most conspicuous in those with darker skin.

Is that it, is there nothing else?

If there is any redness and scaling, a mild topical steroid can help or a topical calcineurin inhibitor (such as tacrolimus or pimecrolimus) can be helpful if there is facial eczema.  In most cases, reassurance is all that is required and a bland emollient or moisturiser is all that is needed to be recommended, if that.

More and more research is looking at the role nutrition plays in disease.  And it is fascinating … END_OF_DOCUMENT_TOKEN_TO_BE_REPLACED