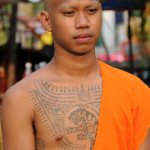 Tattooing brings out all sorts of different emotions depending on who you are, your culture, background and life experiences. We more commonly think of tattoing in accordance with it being a modern fashion accessory (I’m sure many of us can remember Rachel in Friends getting a tattoo) but others may think of tattoos as the preserve of prisoners, street gangs and the like, or associate it as a sign of rebellion.

In fact, tattoos have been around since ancient times and were and are still used to accentuate beauty, signify fertility and be associated with religious ceremonies in different cultures.

What is a tattoo?

I know this sounds like a daft question but just in case you didn’t know, the method of tattooing involves the introduction of particles of pigment into a layer in the skin called the dermis (the supportive layer which provides support and nourishment to the top layer or epidermis.)  The modern tattooist uses an electric needle but it can be any pointed object.

What are the pigments?

These are the colours that make up the tattoo.  So, for example, these may include:

Are there any health concerns with having a tattoo done?

The main concern is of infection. However, serious infections are unusual and are often mentioned in older literature.  Syphilis, tuberculosis, hepatitis and HIV infection are all infections either reported or suspected as having been transmitted by tattooing but this may be due to an infected tattoo operator or unclean needles.  In the UK, tattoo studios are subject to hygiene regulations and so infection should be uncommon.

The commonest side effect is an allergic reaction to the pigments in the tattoo and this can occur a few weeks or up to years after the tattoo was created.  There will be irritation, swelling and redness and parts of the tattoo may become raised and itchy in the area of allergy.  Eczema may also develop elsewhere on the body.

Yes, The Sunday Times did have a report on this towards the end of September last year.

According to this report, an estimated 5% of tattoo studios are using inks containing carcinogenic compounds and there is no regulation in this area like there is for hygiene and infection.

A study in Denmark found that 10 out of 11 black inks (the most commonly used black tattoo inks in Denmark) contained levels of a group of chemicals called polycyclic aromatic hydrocarbons (PAH) above the level recommended by the Council of Europe.

[Council of Europe.  Resolution ResAP (2008)1 on requirements and criteria for the safety of tattoos and permanent make-up,  2008.  Available at: http://www.camtattoo.cn/msds/eis_tattoo_risk_052003_en.pdf]

The most potent PAH found was benzo(a)pyrene (BaP) which is a chemical classified as a group 1 carcinogen (to humans) by the International Agency for Research on Cancer (IARC).

Levels of BaP exceeding the recommended levels were found in ALL 11 samples of black ink tested.

I’ve also heard about tattoo inks containing nanoparticles.  What are these?

Not surprisingly, these are extremely tiny particles.  By definition they should be particles with at least one dimension less than 100 nanometres.

Carbon black is also classified by the IARC as possibly carcinogenic to humans but this is partly based on inhalation studies in rats.   However, carbon black nanoparticles are toxic and induce inflammation in laboratory studies.  It is important to note that there are no studies looking at whether this happens with tattoos in humans.

However, there have been a couple of studies which have reported tattoo pigment in draining lymph nodes though not in any distant organs.

Also, silver nanoparticles injected into the skin of rats were found in main organs such as the kidney, liver, spleen, brain and lung.

Despite all the shocking data, the safety profile of tattoos is good.  Also, the risk of local and widespread risk of cancer from tattoo inks remains unclear with little data to support a link.

The European Commission has published an extensive report on nanoparticles and the associated risk to humans but clearly further research is required to assess this area further.

More and more research is looking at the role nutrition plays in disease.  And it is fascinating … END_OF_DOCUMENT_TOKEN_TO_BE_REPLACED