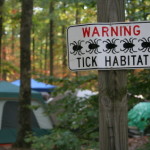 Being March, we may all be thinking of longer days, getting out and about, and possibly enjoying country walks as spring is surely on its way.  By no means trying to put anyone off such honourable pursuits, I do, however, remember that towards the end of last year, a case was presented of a late diagnosis of Lyme disease at one of our Dermatology Clinical Case presentations at the Royal Society of Medicine, London.

What is Lyme disease?

Now, Lyme disease is the most widespread human tickborne disease, spread by ticks from Lyme disease endemic areas.  The disease is named after the towns of Lyme and Old Lyme in Conneticut, USA but it is now endemic in northern hemisphere temperate regions.  In the UK, it is now found in the New Forest, Salisbury plain, Exmoor and the case presented at the Royal Society of Medicine was from a child bitten by a tick in the Ashdown Forest, quite close to home for me.

The bacterium responsible for the disease belong to the genus Borrelia and this is transmitted to humans via the bite of the hard-bodied tick of the genus Ixodes.  Unfed ticks can look black or red-brown in colour and a bit shrivelled-up in appearance.  When fed and engorged, they look significantly larger, more swollen and can look anything from pale to dark red or grey-blue in colour.

How do ticks attach to me?

Ticks feed off blood and anyone who possesses a dog may have come across a tick attached and kind of have an idea how they do this.  If you have not, they look like they have their heads buried deep in the skin with their bottoms sticking out. 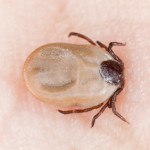 They do this to access the blood by cutting through the skin and then inserting a feeding tube into the resultant hole – a bit like sticking a straw in a drinking glass.  There are backward facing projections to anchor the tick to the host and some also make a cement-like substance which hardens around the mouthparts to firmly seal it into place.

What symptoms would I get if I’ve got the disease?

Early –  about 80% of people bitten will develop a characteristic rash at the site of the bite within 3 to 30 days (usually 7 days) of being bitten.  This has been described as a bullseye with an outer red rim, a central red area and a clear area inbetween and is called erythema chronicum migrans.  There may be an accompanying fever and flu-like symptoms.  20% do not get such a rash and all can still progress onto the later stages of the disease.

Early disseminated – this is where the infection starts to spread around the body and can occur days to weeks after the initial bite.  It has a predilection for affecting the nerves and a variety of symptoms may now manifest such as headaches, sleep disturbance, mood disturbance, light sensitivity to name a few.

A skin phenomenon called Borrelial lymphocytoma can develop which looks like a purplish lump under the skin in places such as the ear lobe, nipple or scrotum.

Late disseminated – this occurs months after the initial bite in untreated or inadequately treated patients.  It can manifest with a whole plethora of symptoms such as muscle pains, shooting pains, memory problems, fatigue, depression, paralysis and arthritis.

Another skin condition that can develop is called Acrodermatitis Chronica Atrophicans.  This is where the skin turns a reddish-blue colour, usually on the backs of the hands or feet, which then becomes thin and wrinkled and eventually, completely dry and hairless.

I like walking in the woods!  How do I avoid getting Lyme disease?

In December of last year, Due et al wrote a clinical review on tick bite prevention and tick removal in the British Medical Journal.

Their advice is as follows:

Wear appropriate clothing – this is the simplest preventive measure, though does not guarantee full protection.  It involves long trousers tucked into socks and long-sleeved shirts tucked into trousers.  Clothing should be checked every 2-3 hours during a trip to a tick infested area and for up to 1 week after returning home as they can remain hidden within clothing and attach later!

Trans-p-methane-3,8-diol (PMD) – this is the active ingredient to lemon eucalyptus oil and does have a high degree of effectiveness.  It can be applied as often as required as there has been no demonstrated toxicity with its use.

Clothing must be retreated after at least every 20 washes to have continued protection.  Permethrin which has been polymerized into the fibre surface of clothing (at the factory of manufacture) provide a high level of protection (>93%) which is also resistant to washing.  This type of clothing is recommended for those who will be spending prolonged periods of time in tick infested areas.

Despite all the above, I’ve still been bitten by a tick?  Should I remove it?

Yes, definitely!  The longer the tick feeds for, the higher the risk of contracting Lyme disease.  Studies have shown that if the tick has been attached for less than 24-36 hours, the risk of contracting the disease is low (this is the duration of time needed for the bacteria to migrate from the tick’s midgut to its salivary glands), though this can vary with the type of Borrelia species.

How do I remove a tick?

There are many anecdotal ways of removing the tick which basically include suffocating the tick so that it eventually falls off the skin.  Materials suggested include the use of a thick grease such as petroleum jelly but the aforementioned BMJ article also mentions the use of gasoline, fingernail polish, 70% isopropyl alcohol or placing a lit match next to the tick.  None of these methods are recommended.  This is primarily because the tick has a low respiratory rate anyway and secondly because they don’t cause prompt detachment of the tick and may increase its chances of regurgitating its stomach contents into the skin and thereby increasing the risk of transmission of disease.

So how do you do it properly?

Studies in humans have shown that fine-tipped forceps, grasping the tick as close to the skin as possible and pulling upwards with steady, even pressure, protected against Borrelia, infection and complications and this is the recommended method of removal in humans.

However, if you ask any pet owner or vet, they can often recommend various tick removing tools as they often remove the ticks quicker, are easier to grab and cause less damage to the tick’s mouthparts.  However, there are no studies looking at the use of these tools in humans and so they cannot be recommended.

What should I do once I remove the tick?

Public Health England recommend that the removed tick be submitted to them for identification.  You should also look out for symptoms of Lyme disease (see above) and see your GP if you are worried.

What is the treatment?

Antibiotics such as doxycycline, if given within 72 hours of a tick bite has been shown to prevent Lyme disease.

This should be given for 2 to 3 weeks.  Alternative antibiotics can be given as an alternative, the earlier the better and sometimes intravenously in more severe cases.

More and more research is looking at the role nutrition plays in disease.  And it is fascinating … END_OF_DOCUMENT_TOKEN_TO_BE_REPLACED