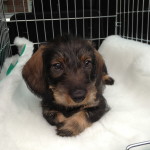 We’ve acquired a puppy this year, which has been very exciting for us.  However, owning a pet is not a new thing to us.  We’ve had pets in our family even before we had children and we feel our children benefit from having animals around them in many ways.

Has anyone heard of the Hygiene Hypothesis?

This was first suggested by Strachan in 1989 and since then it has been supported by epidemiological studies.

It suggests that modern infants living in developed countries with higher hygiene standards and smaller family sizes have less stimulation of their immune system in early life.  These children then do not develop a so-called, tolerant immune system and are therefore more prone to developing allergic disease.

I’m getting confused!  So, we all should get a parasite?

Well no.  To continue the story, supportive evidence for the Hygiene Hypothesis all started with evidence looking at children living on farms who are exposed to a wide variety of microbes (bacteria and other organisms).  The more diverse the exposure to these microbes, the less the risk of asthma.

However, further studies looking at what part of living on a farm is contributing to this protective effect showed that farmers’ children have less asthma and hayfever symptoms than other rural children.  This protective effect was mainly due to consumption of unpasteurised milk and if this was taken into account there was also less allergy, less hayfever and atopic eczema.

So, where does it all tie in with getting a puppy?

Not surprisingly, therefore, there have been numerous studies looking at children with asthma, hayfever and atopic eczema to investigate the role of pet ownership on these diseases.

Current guidelines in Australia, USA, the UK and the Global Initiative for Asthma agree that there is currently insufficient evidence to provide any recommendations in relation to pet-keeping in early life and the development of asthma and allergic disease.

However, there are several recent papers showing beneficial effects of pet ownership.  You have to bear in mind that in order for guidelines to be made, there needs to be a sufficient body of evidence supporting them.  Just because there is not enough evidence doesn’t mean that something doesn’t work; just that there have not been enough large, well-conducted studies out there to prove it so.

What is the evidence then?

One review article looking at 9 studies with a total population of 6,948 children showed that exposure to dogs or cat and/or dog in the perinatal period (classified as 20 weeks prior to birth and up to 4 weeks after), and a critical time in the maturation of the infant immune system, may reduce the development of allergic disease in children without a family history of allergy.  Interestingly, 2 of the studies looked at high-risk children (family history of allergic disease) and found an increased risk of allergic outcomes in the presence of dog or cat exposure at birth.

Another study looking at pet ownership in infancy (first 2 years of life) showed that pet ownership of cats, dogs, birds, rodents did not appear to either increase or reduce the risk of asthma or hayfever symptoms in children aged 6-10years.

This has been corroborated by another study looking at cat exposure and daycare in children with atopic eczema and the development of asthma in these children.  Dog and mouse exposure also protected but not to a significant level.

The most recent paper looked at perinatal pet ownership and subsequent wheezy bronchitis, together with analysis of microbes in the gut of these infants.  129 infants were included in the study and were followed up for 24 months.  None of the 30 infants exposed to pets suffered from wheezy bronchitis by 24 months whereas 15% of the nonexposed infants did.  Also interestingly, the gut microbial counts were higher in samples from non-wheezing infants with pet exposure compared to those in wheezing infants without pet exposure.

So where does that leave us?

More and more research is looking at the role nutrition plays in disease.  And it is fascinating … END_OF_DOCUMENT_TOKEN_TO_BE_REPLACED