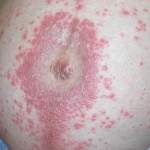 All of a sudden, I seem to know a whole load of pregnant people.  There must be something in the water in this part of Kent!  However, on a professional level, we have also had quite a few referrals for pregnancy-related rashes recently and I have realized that this is one area that I have not touched upon in my blog.

Having been through pregnancy myself on several occasions, it is a wonderful, life-changing event which can also be a little bit scary and worrisome too.  So the last thing you really need is having to face it all encased in itchy, scratchy skin.

Does every pregnant woman get itchy skin?

Many women develop some degree of itching during pregnancy.  It has been reported in up to one fifth of all pregnancies.

Is it a problem if I do get itchy skin?

There is a small number in whom they just get itchy skin without it being due to a primary itchy skin condition such as eczema.  This is called pruritus gravidarum.

It is thought that pruritus gravidarum is a mild variant of a condition called cholestasis of pregnancy, which obstetricians commonly see.   This is where blood tests can show abnormal liver function tests and you might be mildly jaundiced.  The itching occurs later on in pregnancy, usually in the second or third trimesters and is often localized to the tummy but can occur elsewhere.  There is no skin rash.  The itching usually subsides quite quickly after delivery and may recur with subsequent pregnancies.  If this occurs, your obstetrician may recommend a treatment called ursodeoxycholic acid.

What if I am itchy and there is a rash?

A condition we commonly see as dermatologists is pruritic urticarial papules and plaques of pregnancy  or PUPPP.  This begins in the very late stages of pregnancy, usually the third trimester and usually in a first pregnancy.  Occasionally, it can occur a few days after childbirth.

In this condition, the itching is severe and the rash consists of raised, red spots and plaques.  Less commonly, you can see small blisters (vesicles) and other lesions.  The most striking feature is that the rash begins and tends to stay on the tummy, closely following the stretch marks, if they are present, but with sparing of the belly button. This is why it is thought that abnormal weight gain in the mother or twin pregnancies, resulting in excessive stretching of the skin on the tummy may be responsible.

What treatments are there for this?

Steroid creams and emollients can help, together with antihistamine tablets.

What is the outlook for PUPPP?

PUPPP is not going to endanger anyone’s life which is a huge relief to everyone concerned.  Most mothers are reassured to know that the rash will disappear at or soon after childbirth and may not recur in subsequent pregnancies.  If it does so, it is usually less severe.

I’ve heard there is a scary pregnancy rash which is dangerous?

Yes, there is such a rash.  It is called pemphigoid gestationis.  It is very rare and is thought to have an autoimmune basis in which the interaction between the mother and the foetus (who is made up of mother and father cells) triggers an immune response which cross-reacts with the mother’s skin.

It is also intensely itchy and can occur anytime between 4 weeks’ gestation and 5 weeks’ after delivery, but most present in the 2nd or 3rd trimesters.  Most cases occur in the first pregnancy and it can recur in subsequent pregnancies.

This condition also usually begins on the tummy, around the belly button and then spreads.  The rash can be composed of raised red spots and plaques which then develop into vesicles and larger blisters.  The baby can also be affected.

Can it be treated?

Yes, it can.  If the baby develops blisters, these usually resolve without treatment.  In mild cases in the mother, steroid creams and antihistamine tablets can be helpful.  If blisters develop, steroid tablets are required and patients would usually require the expertise of a tertiary dermatology referral centre specialized in the management of this condition and also in conjunction with obstetric units that have special care units for newborn babies .

What is the outlook for pemphigoid gestationis?

It also tends to improve after delivery but it can take weeks, months or years to be completely clear of disease.  Having periods or taking the oral contraceptive pill can also cause flares.

Patients should be counseled regarding the risk of recurrence in subsequent pregnancies but should not be discouraged.  It is unclear whether changing partner alters the risk of developing it again.

How can you tell the difference between PUPPP and pemphigoid gestationis?

Any pregnant woman who develops an increasingly itchy skin rash with blisters or vesicles should be seen by a dermatologist.  We often perform skin biopsies, one of which would be sent for a special test called immunofluorescence and if this is positive, it is indicative of pemphigoid gestationis.

It looks like energy, who has it, who has the most and who can create it, is going to be one of the … END_OF_DOCUMENT_TOKEN_TO_BE_REPLACED