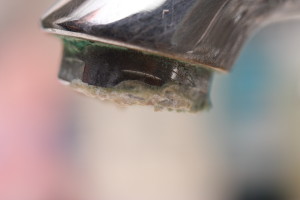 A friend recently asked my opinion about water softeners as he was thinking of purchasing and installing a water softener in his home.  His family, bar himself, suffered with eczema which had worsened in recent months.  This is actually a not uncommon question.

What evidence is there for water softeners in the management of eczema?

There has been a recent trial looking at the role of ion-exchange water softeners in the management of eczema in children.

Was this a good quality trial?

Well, yes; it is a large trial over several years involving several centres.  This trial took place between 2007 and 2009 and involved 336 children aged between 6 months and 16 years of age who had eczema.  All the children were recruited from 8 centres around the UK which were in predominantly hard water areas (Nottingham, Cambridge, two in London, Isle of Wight, Leicester, Lincoln, Portsmouth).  All the children lived in homes which were suitable for straightforward installation of a water softener and suffered with moderate to severe eczema.  Usual eczema care was continued for the duration of the trial, ie topical steroids and emollients (moisturisers).

What did the study find?

This study found that the eczema improved in the group that had an ion-exchange water softener installed plus their usual eczema care aswell as in the group that just had their usual eczema care alone.  Indeed, the water softener group had a 20% improvement in their eczema compared to a 22% improvement in the usual care group.  Also, neither group used more steroids or emollients than the other group.

Parents of three of the participants thought that their child’s eczema had worsened as a direct result of having the water softener installed and two asked for it to be removed.

What happened at the end of the study?

It is interesting to note, however, that over 50% of parents in the trial did choose to buy the water softener at the end of the trial.  66% of these reported it was because they perceived their child’s eczema had improved and 27% bought it because of the wider benefits of a water softener in the home (decreased limescale build up, decreased soap and detergent use).  7% bought it for both of the above reasons.

What were the study’s findings?

So basically, the study’s findings could not recommend the use of an ion-exchange water softener for the treatment of moderate to severe eczema in children.  However, there are other benefits to having a water softener in the home, especially if you live in a hard water area, but that would be up to you as to whether these justify the cost of purchasing and installing a water softener or not.

More and more research is looking at the role nutrition plays in disease.  And it is fascinating … END_OF_DOCUMENT_TOKEN_TO_BE_REPLACED