Now for those of us with children, it’s coming to that time of year when we’re getting them all ready to go back to school or possibly even preparing them to start school for the first time.

I remember when my eldest started school for the first time; there were a lot of new faces to get acquainted with, both for him and myself.  Within a few weeks, everything had started to settle and the other parents’ faces were becoming familiar.

We were all starting to chat in the school car park, getting to know one another and I couldn’t help but notice that several of the mothers had commented on the fact that their children were intolerant of several foods after having undergone an allergy test.  Most of these tests had been performed at various clinics, namely homeopathists or some sort of alternative medicine institution.

There are multiple tests for allergy available but many have very limited scientific credibility or no scientific basis at all.

Indeed, they are not recommended in the diagnosis of food allergy by the National Institute for Health and Clinical Excellence (NICE).

Examples of such allergy tests are:

In electrodermal testing (Vega testing), the patient holds a hand electrode which completes an electric circuit with a galvanometer.  An extract of the food in question is placed on an aluminium plate which is then inserted into this electrical circuit.  Any change in the electromagnetic conductivity is taken to indicate an allergy or intolerance to the food in question.  (See Figure 1) 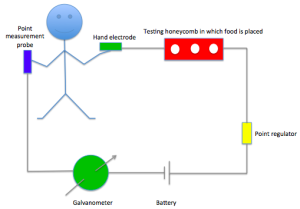 In applied kinesiology, the patient is asked to hold one arm out to one side.  The suspected allergeneic food is then placed in front of the patient and the assessor presses down on the patient’s outstretched arm.  Any perceived weakness in the arm while the food is present is taken to indicate an allergy to that food. (See Figure 2)

There are only two tests which are used in the diagnosis of food allergy.

These are skin prick tests or blood testing for IgE antibodies.  IgE is the antibody involved in immediate allergic reactions.  These should be performed by someone who is trained to interpret the results in combination with a full clinical history.

Why is it important to get a diagnosis of food allergy correct?

It is important to get the diagnosis of food allergy correct as it may mean life-long avoidance of that food.  It has also been shown that the quality of life of a food allergic person can be lower than that of a person suffering with diabetes.  This can be because food shopping times are longer, eating out can become a nightmare and food allergy sufferers often live in fear of accidentally eating a food which could possibly kill them.

Also, as I saw in the school car park, parents are cutting out whole food groups (such as dairy, wheat and egg products) from the diet of their children and in some cases this can lead to disastrous consequences.

Why, what can happen?

Children are rapidly growing and need as broad a diet as possible in order to gain all the nutrients they require in order to be healthy.  At Beckenham hospital, our Paediatric Allergy team are seeing more and more cases of children with rickets and other dietary deficiencies and clearly, this should not be happening, especially in children in whom there is no proven food allergy.

It looks like energy, who has it, who has the most and who can create it, is going to be one of the … END_OF_DOCUMENT_TOKEN_TO_BE_REPLACED