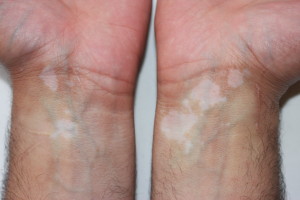 If you are dark-skinned and have vitiligo then the summer may be a hard time of year for you.

Vitiligo is a not uncommon skin disorder which causes the development of pale or whitish patches on the skin.

It can begin at any age and is usually progressive in that once it develops, new patches continue to develop with time.  In some people though, they may develop a lot of patches in one go and have several months to years without any new patches developing.

Where does vitiligo occur?

Vitiligo is often first noticed in areas that get a lot of sun such as the back of the hands or the face.  Vitiligo also tends to develop in areas that get a lot of trauma or friction such as the hands, feet, elbows etc and also in scars.  The hairs in the patches of vitiligo frequently remain unaffected but in longstanding patches they can go white too.

How do people develop vitiligo?

It is still not completely understood why some people develop vitiligo.  There is certainly a genetic factor to the development of vitiligo.  Between 30 to 40% of patients have a family history of it.

It is thought that certain other autoimmune disorders (such as thyroid disease and pernicious anaemia) are associated with vitiligo.

How do you treat vitiligo?

The main problem with vitiligo is the cosmetic appearance of the disease and this can be considerable if the disease is widespread and the patient has dark skin.

Also, most treatments tend to be unsatisfactory in that they do not stop the progression of the disease and unfortunately, there is no cure for vitiligo currently.

Often the simplest treatment for quite disfiguring and visually obvious patches is applying camouflage, ie a special prescribed form of make-up available through referral to the charity Changing Faces (see below).

Also, as the patches do not contain any pigment or melanin, they can burn easily and so a high-factor broad-spectrum sunscreen is advised.

Additionally, as the patches tend to occur in areas of trauma, trying to minimize trauma to the skin is advised, eg shaving using an emollient such as aqueous cream can help prevent trauma in the beard area.

Prescribed treatments include the use of potent topical steroids and these can be successful in getting new, small patches to repigment and can be used in a ‘pulsed’ regime, ie 2 weeks on followed by 2 weeks off, for example.

Alternatively, there is another type of cream which are calcineurin inhibitors which may also be effective in some cases.

Quite widespread vitiligo may warrant referral by your dermatologist for phototherapy which involves irradiating the skin with medical light rays.  There are obviously side-effects to this treatment and you would need to be seen and assessed by a dermatologist first.

For some patients, this can be a very disabling condition because it is so visually obvious.  The charity Changing Faces are an excellent resource for those who have further questions regarding how their life is affected by vitiligo, together with the Vitiligo Society.

More and more research is looking at the role nutrition plays in disease.  And it is fascinating … END_OF_DOCUMENT_TOKEN_TO_BE_REPLACED